genre development: RPGs are not different 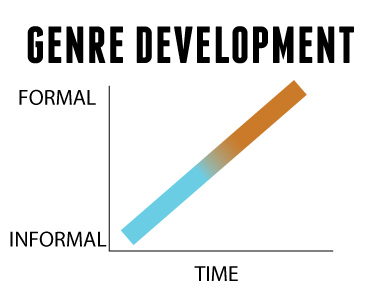 According to some theorems It was not so long ago that the game of Go was a mystic pursuit. It’s board and pieces perhaps used as tools of divination, and from this ethereal realm developed one of the greatest abstract board games of human history. What did Go look like before it developed into the structure of a game? How did the activity travel between groups. How strange, unique and difficult was it for people to understand what a board game was. I ponder this now after understanding what RPGs are.

It was only a few years ago that I thought “RPGs are different” I had been making board & card games for years and just started the project that would become Seed RPG. At that time I felt rpgs were different then board or card games, a less structured play that required players to actively try and make it work and that it required talent to play a satisfying game. RPGS were not as rugged and broke more easily then board games, they were a swirl of ether, a practice that could only be learned through experience and that is why they struggled so hard compared to the success of board and card games. I was not wrong, RPG are those things I listed. However RPGS could develop into something else.

Boardgames have had millenniums to develop into the tightly structured form of play we know today. Who played mancala before there was a victory condition? When it was just a simple system to distribute seeds into holes, the pure joy of watching a systematic behavior iterate. That history is lost to us, it’s conjecture. We no longer remember how our forms of play developed.

If something happens during a board game a game designer can likely give you a reason, development methods are advanced If something goes wrong in a game we quite naturally blame the game. Not so for RPGS, RPG culture tends to blame the player. There are not games that allow min/max play, there are munchkins. There are not boring rpgs, there are bad game masters. I could go on and on. Every time you hear about a problematic type of RPG player you could just as easily turn the tables and blame the game.

This inability to blame the game speaks volumes to where RPG development is. Rpgs are where board games were so many thousands of years ago, a young genre of play. An informal activity waiting to be structured into a game. They are not special, they are not different, they are here and I’m going to work at advancing them.

This entry was posted in hardcore. Bookmark the permalink.